Based on the science of Kundalini Yoga, as taught by Yogi Bhajan, the Aquarians Teacher Training program is a journey of your soul. Develop and grow as a human being as you become a Kundalini Yoga teacher. The Aquarian Teacher Training Certification is open to yoga students ready to become teachers and those who wish to immerse themselves deeply in the science of Kundalini Yoga. Experience transformation in the present where peaceful vitality is alive in the ancient land itself. 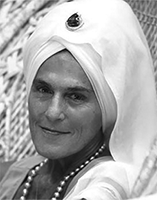 Gurmukh Kaur Khalsa, 71, is the world renowned Queen of Kundalini Yoga and the founder of the Golden Bridge Yoga with centers in Los Angeles, Santa Monica, and New York City. Golden Bridge is the premier center for the study and practice of Kundalini Yoga and Meditation as taught by Yogi Bhajan.Since being baptized by Yogi Bhajan, 43 years ago as “Gurmukh”, meaning one who helps thousands across the world oceans, Gurmukh has dedicated her life to fulfilling her namesake.In her life as a Kundalini Yoga teacher based in Los Angeles, Gurmukh developed a celebrity clientele, music divas Madonna, Courtney Love; Hollywood actors Gwyneth Paltrow, David Duchovny, Annette Bening and Rosanna Arquette are some of the many known names that have benefitted from Gurmukh’s teachings.