One day, when I was 15 years old, I was walking on the street coming from somewhere, going somewhere when a car stopped next to me, the door opened and a man got out. He gave me his visiting card and said simply, “If you’d like to ever model then give me a call”.I did, and two years later I was on the cover of one of India’s most respected fashion magazines, ‘Femina’ with the title, “Bijay Anand – Face of 1995”. I went on to modeling for over 400 assignments, which then became the stepping-stone to a successful acting career.

Years later, I had bought a few paintings for myself and had taken them to the best framer in town for reframing. A gentleman standing next to me exclaimed, “Good lord!! These are gorgeous!!”.

Sensing an opportunity window here, I grinned and said, “They’re for sale if you’d like to buy them”. I quoted him 3 times the price I paid, closed the deal and that was my first step into the art world.

From selling art to the best corporate houses in India, having the most eclectic and distinguished clientele as well as dealing with the biggest art auction houses in the world including Christie’s and Sotheby’s it was and continues to be an incredible journey.

Five years ago, I did a yoga course to help me battle my own demons as well as to pull myself out of a decadent and self-destructive lifestyle. At that time, I had no intention of becoming a yoga teacher.

A month later, I was sitting with a friend who had recently opened a yoga studio. She asked me that since I had done a course would I consider teaching at her studio?

I agreed and within a couple of years I was teaching at some of the best yoga studios around the world apart from being invited to the most distinguished of yoga festivals like the International Yoga festival – Rishikesh, The Great British Kundalini Yoga festival – London, The Holistic Live festival – Manchester, India Yoga festival – Goa as well as The Yoga festival in Guangzhou in China.

Apart from these I started a yoga company Anahata which is now the number one yoga retreat company in India.

There are three kinds of opportunities that life presents to you that you must be aware of. As and when they pop-up before you, you must accept these to live your life to the fullest. 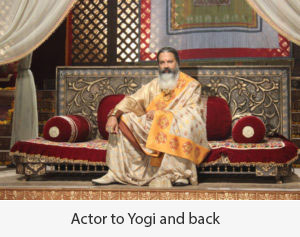 Fifteen years ago, I was at the Pompidou museum in Paris ecstatically absorbing the marvel of the beautiful canvases by Joan Miro when I locked eyes with a beautiful woman. It was a flash in which it was clear that we both had felt an immediate and powerful connection with each other.

I looked away, unsure of my next course of action. We both toured the Miro retrospective almost together for the next 30 minutes both aware of each other, both unsure of what to do next.

In the end, I did nothing, said nothing and ever so often during the past 15 years I have wondered, “What if?”.

When you meet someone there are two things that can happen. The first is that you could never meet that person again or just end up as casual acquaintances or, you could end up being best friends for life. Who knows? It could very well end up being your soul mate or your life partner.

One of the things that define our lives is not the number of friends that we have in our life but the quality, depth and integrity of our relationships.

When someone pop-up in your life, you need to have your radar up to recognize those special relationships. Sometimes, you may very well just miss out on an opportunity to have a beautiful, deep and meaningful relationship just because you allowed it to pass you by.

The health and wisdom opportunity

A month ago, I met a stunning young girl, all of 14 years who had offers for movies, TV shows and international advertising endorsements from some of the biggest brands in the world coming out of her ears. While talking to her I noticed that she had eczema on her hands and neck.

Knowing what I know about Ayurveda, I explained to her and her mother exactly how dangerous this disease could possibly be, how it could flare up and cover every inch of her body as well offered them simple, easy-to-follow diet plans to help her solve this problem.

The next day I saw that little girl eating exactly the same junk that she was eating the first day when I had met her.

What this girl and her mother did in effect was deprive themselves an incredible opportunity to learn from someone who knew the intricacies of this ailment and could help them to solve it forever.

I on the other hand, would sit on the feet of anyone who could teach me anything. Several of my Gurus have called me a ‘Sponge’ with an endless and insatiable desire to learn and to grow. When I meet someone, anyone who can teach me anything, I grab hold of them and hold on to them with my dear life.

These are opportunities to live a healthy and a joyous life. A life of awareness and wisdom, which eventually could lead to absolute enlightenment.

I had offered a job to a cousin of mine 15 years ago. He had declined it then. He allowed that opportunity to pass him by. Fifteen years later, he is exactly where he was then and is not even slated to get to anywhere special in his life.

The opportunities that I had grabbed in my life enumerated upon earlier in this blog helped me to realize my potential as an actor, an art dealer and a yoga teacher. Having the sensibility, wisdom and alertness to recognize an opportunity when it knocks at your doorstep separates the haves from the have-nots.

So while some have great friends, amazing spouses and colleagues there are those who are lonely and have no meaningful relationships in their lives.

Whereas some are successful and living in abundance, others are living in pecuniary and misery because when the time came to make a quick decision they just hummed and hawed.

I wish for you to live your life to the fullest. Have beautiful relationships, learn, grow, be healthy, successful and happy in your life.

Understand the importance of being fully alert for opportunity pop-ups. Most of them do not come back after they go away.

Grab them and live happily ever after.